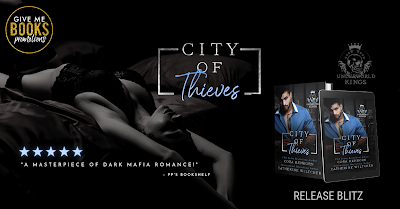 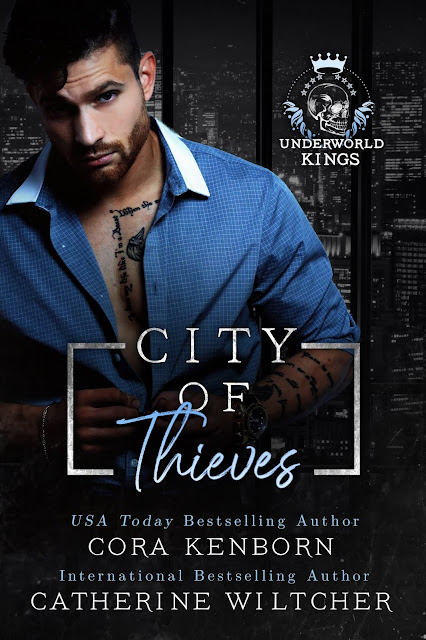 Title: City of Thieves
An Underworld Kings Series Standalone
Authors: Cora Kenborn & Catherine Wiltcher
Genre: Mafia Romance
Release Date: November 30, 2021
BLURB
From Cora Kenborn and Catherine Wiltcher comes a new mafia romance where love is the most dangerous crime of all…
This city tells a story of a man seeking vengeance…
Renzo Marchesi gives me two choices when he walks, unannounced, into my art gallery:
Help him find his brother’s killer or suffer the consequences.
He’s a mafia prince…
Heir to the Marchesi throne.
A man consumed by his demons.
Beautiful.
Ruthless.
I don’t belong in his world, and he doesn’t belong in mine.
Still, I’m not the spoiled politician’s daughter he thinks I am…
This is the City of Thieves, where lies are hard currency and deception is the real art.
Trust no one.
Love no one.
Too bad I don’t follow my own rules.
They say black arrows make for bleeding hearts.
Now, I’m planning the ultimate heist for a man who never misses.
City of Thieves is an enemies to lovers mafia romance with no cliffhanger and a guaranteed HEA. For mature readers only.

If are in need of a dark, delicious, roller coaster ride then please grab a copy of City of Thieves. This writing duo definitely know how to reel you in with their writing. Secrets and lies are a main part of this story. We have Renzo who is our ruthless alpha-hole who takes no prisoners. He is unrelenting in his endeavors and refuses to let anyone get in his way. Tatiana is our sassy heroine who has so many secrets that give Renzo’s demons something to think about. I invite you to curl up and read just how two broken souls find their way in a world that built on deceit.
ADD TO GOODREADS
JOIN THE SERIES FACEBOOK GROUP 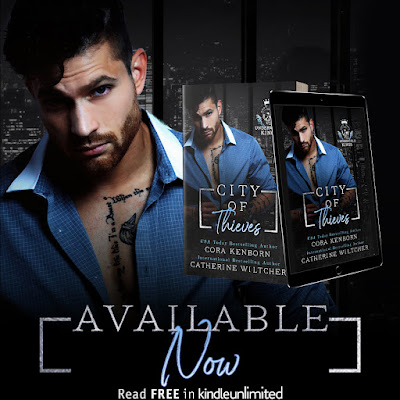 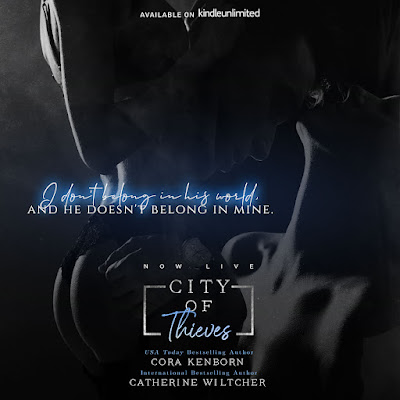 EXCERPT
I press the intercom, prompting a security guard to glance up from his station. Running his eyes over my expensive suit, he buzzes me in.
“Marchesi,” I state, noting he doesn’t even check his guest list.
“Miss Sanders has requested you join her in the atrium.” Following a half-assed pat down, he gestures to the far end of the art gallery. “Through those double doors. Can’t miss it.”
Wouldn’t want to.
As I walk, my gaze trails like dirty fingers against each canvas. They all look like kids’ paintings to me. Still, I’m impressed. At twenty-three years old, Miss Sanders has created quite a business for herself.
Shame she’s about to lose the whole fucking thing.
Stepping into the glass-domed atrium, I spot her slender silhouette right away. I take in her profile as she gazes up at some abstract piece of shit painting that looks like gasoline-splashed asphalt. She’s more than appraising the canvas—she’s absorbed in it—her head tilted to the side, her dark hair still twisted into that tight bun from yesterday morning, not a hair out of place, with her tight black pencil dress holding all her secrets in.
What is it about this woman?
My type is uninhibited, not uptight. But there’s a dark part of me that wants to see her come undone in my hands; to take a hammer to that icy facade and see what’s really underneath. To close my fists around that hair and arch her back as I slam my cock into that frigid pussy.
I take a step closer.
She must have heard me, but she’s refusing to turn.
And another…
“Careful, Miss Sanders.” I move in close behind her, watching as her shoulders stiffen. “You’re becoming dangerously predictable.”
Her eyes never stray from the painting, while my eyes never stray from her tiny waist, the material gently flaring into the kind of curves that make me pay close attention.
“And how’s that, Mr. Marchesi?”
Christ, even her voice is like a rainstorm in December.
One more step brings us to an even level. “You have a strange fascination with complicated artwork,” I note, gesturing at the canvas.
“Oh?”
“Does it reflect a complicated woman?”
She tilts her chin in the air, the light catching on a razor-sharp cheekbone. “Have you come to psychoanalyze me or to take something else that belongs to me?”
Dangerous words, Miss Sanders.
Remorse isn’t a trait found in the Marchesi gene pool. I’m here for revenge. I’m here to use, destroy, and ruin, and that includes her and her precious paintings if need be.
When I don’t answer, she clips out, “You’re five minutes early.”
“Only a fool steps on unbalanced ground when he’s expected, dolcezza. Yet, you don’t seem surprised?”
“Should I be?”
Look at me, for fuck’s sake.
Her aloofness is both infuriating me and making me want to pin it up against the wall. Instead, I flatten the smirk tugging at the corners of my mouth. I’m almost impressed. I’m rarely knocked off focus. However, cold detachment isn’t a new game, and Miss Sanders is about to get a lesson she won’t soon forget.
“Most people are grateful when their date arrives on time.”
“A date? Is that what this is?” A low, sardonic laugh rumbles in her throat as she finally turns on those killer high heels and aims her green eyes right at me.
She’s even more beautiful up close, delicate features like fine china covering a hard shell of indifference…
But everything breaks for a price.
© Catherine Wiltcher & Cora Kenborn 2021 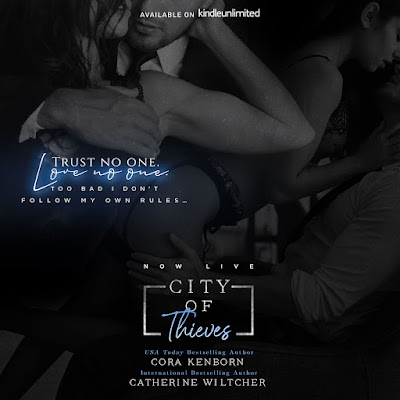 CORA KENBORN
Cora Kenborn is a USA Today Bestselling author who writes in multiple genres from dark and gritty romantic suspense to laugh-out-loud romantic comedy. Known for her sharp banter and shocking blindsides, Cora pushes her characters and readers out of their comfort zones and onto an emotional roller coaster before delivering a twisted happily ever after.
Cora believes there’s nothing better than a feisty heroine who keeps her alpha on his toes, and she draws inspiration from the strong country women who raised her. However, since the domestic Southern Belle gene seems to have skipped a generation, she spends any free time convincing her family that microwaving Hot Pockets counts as cooking dinner.
Oh, and autocorrect thinks she’s obsessed with ducks.
WEBSITE
NEWSLETTER
AMAZON
BOOKBUB
FACEBOOK
FACEBOOK GROUP
TWITTER
INSTAGRAM
CATHERINE WILTCHER
Catherine Wiltcher is an international bestselling author of twelve dark romance novels, including the Santiago Trilogy. A self-confessed alpha addict, she writes flawed characters who always fall hard and deep for one another. She lives in the UK with her husband and two young daughters. If she ever found herself stranded on a desert island, she’d like a large pink gin to keep her company… Cillian Murphy wouldn’t be a bad shout either. Sign up to her newsletter for book updates and exclusives! www.catherinewiltcher.com/newsletter
WEBSITE
FACEBOOK
FACEBOOK GROUP
GOODREADS
TWITTER
INSTAGRAM
BOOKBUB 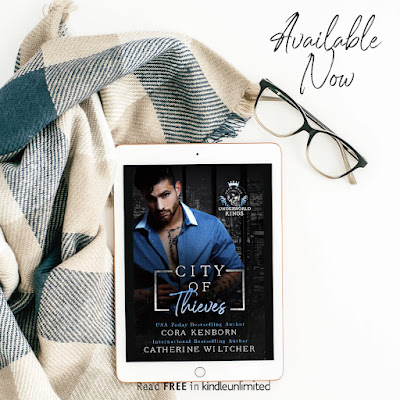