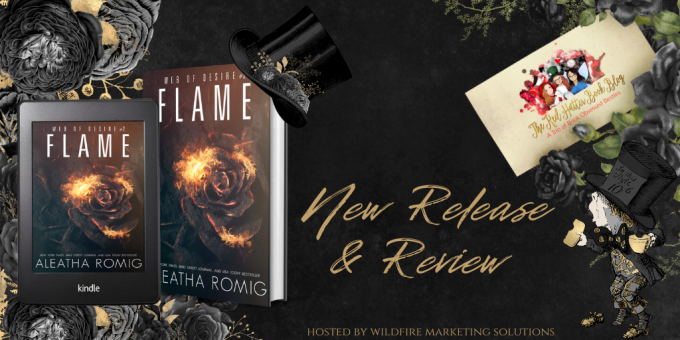 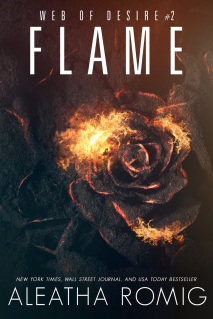 From New York Times bestselling author Aleatha Romig comes a brand-new dark romance, Spark, set in the same dangerous world as Secrets and Twisted. You do not need to read the Web of Sin or Tangled Web trilogy to get caught up in this new and intriguing saga, Web of Desire.
“What matters most is how you walk through the fire.” ~ Charles Bukowski

No longer simmering and crackling beyond our realm, the fire smoldering in the distance roars to life. The blaze has the capacity to scorch and destroy everything and everyone in its path.

All that I’ve known and believed was obliterated the moment Madeline spoke a truth I’d never suspected. With one sentence, one plea, my life has taken an uncharted turn. Through the smoke and soot, I search for answers.
A man, an outfit, and my brothers-in-arms have been my solace, my calling, and my reason to live. Now that I know there’s more, what will the future hold?

The Ivanov bratva wants Chicago. I want what they possess. With the Sparrow world at war, and Madeline’s declaration, she and I are surrounded, trapped by the inferno.
What will remain when the flames cease and we are left surveying the ashes?

WOW!! This is the second book in this outstanding trilogy. We pick up right where Spark ended with that little bomb that left us craving more of this story. In Flame we get a raw nitty gritty no holds barred story. It is emotionally jam packed and you will find yourself yearning for what is going to happen next. I am not a fan of reading past to present back to the past again, but this author does it in a way that I’m good with. I didn’t feel like I was getting whiplash from trying to keep my facts straight. I was completely intrigued and enthralled from beginning to end.
We get to delve more deeply into Maddie’s background and just what took place until she was reunited with Patrick. If you thought we even got a glimpse of her past in the first book hang on to your knickers, because all I can say is no we did not. Patrick is all hot and alpha like, and he will not let anything step in his way when it comes to Maddie. The emotions he has are completely understandable. Does he love her? Does he hate her? Well at the moment we all now he is feeling all kinds of emotions for her. Lets not forget his loyalty to his family. The poor guy feels like he is stuck between a rock and a hard place.
I will say this ending is enough to give a heart attack!! I was like NO!!! please don’t end I need to know what is going to happen. FYI It ended anyway so please don’t mind me I’m going to be sitting over here in the corner biting all my nails while I impatiently wait for the ending to this intriguing story.

Spark is book 1 of the Web of Desire Trilogy and is available NOW!

Ashes is book 3 of the Web of Desire Trilogy is up for Pre-Order!

Check out the series:

Aleatha Romig is a New York Times, Wall Street Journal, and USA Today bestselling author who lives in Indiana, USA. She grew up in Mishawaka, graduated from Indiana University, and is currently living south of Indianapolis. Aleatha has raised three children with her high school sweetheart and husband of over thirty years. Before she became a full-time author, she worked days as a dental hygienist and spent her nights writing. Now, when she’s not imagining mind-blowing twists and turns, she likes to spend her time a with her family and friends. Her other pastimes include reading and creating heroes/anti-heroes who haunt your dreams and bring your imagination to life!
Aleatha released her first novel, CONSEQUENCES, in August of 2011. CONSEQUENCES became a bestselling series with five novels and two companions released from 2011 through 2015. The compelling and epic story of Anthony and Claire Rawlings has graced more than half a million e-readers. Aleatha released the first of her series TALES FROM THE DARK SIDE, INSIDIOUS, in the fall of 2014. These stand alone thrillers continue Aleatha’s twisted style with an increase in heat.
In the fall of 2015, Aleatha moved head first into the world of dark romantic suspense with the release of BETRAYAL, the first of her
five novel INFIDELITY series that has taken the reading world by storm. She also began her traditional publishing career with Thomas and Mercer. Her books INTO THE LIGHT and AWAY FROM THE DARK were published through this mystery/thriller publisher in 2016.
In the spring of 2017, Aleatha released her first stand-alone, fun, and sexy romantic comedy with PLUS ONE, followed by the sweet stand-alone, ONE NIGHT.
Aleatha is a “Published Author’s Network” member of the Romance Writers of America and PEN America. She is represented by Kevan Lyon of Marsal Lyon Literary Agency.
Get Aleatha’d Here:
Newsletter | Website | Facebook | Amazon Author Page | Goodreads | Instagram | Twitter | Pinterest