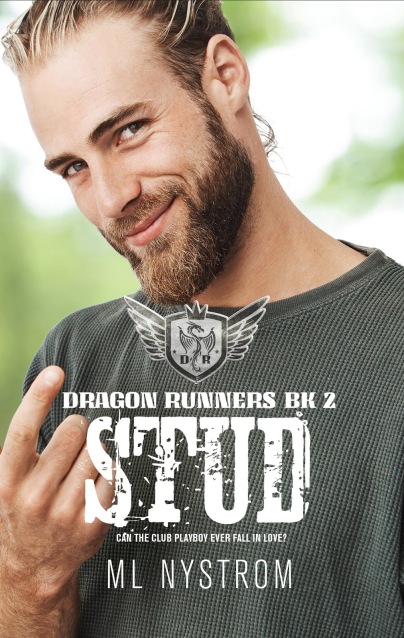 Title: Stud
Series: Dragon Runners #2
Author: ML Nystrom
Publisher: Hot Tree Publishing
Genre: MC Romance
Release Date: June 23, 2018
Blurb
Bold and brash, Eva MacAteer has spent her life working in her
blue-collar family’s construction business. In doing so, she’s had to fight for
her own place away from her overbearing father, as well as for her own identity
as a woman. Struggling between her loyalty to her brothers and her desire to
strike out to be her own person, Eva knows one thing for certain: getting
involved with a womanizer, no matter how hot he may be, is not the path for
her.
Stud is not one to be tied down to any woman. Fiercely loyal to the
club and his single ways, the last thing he expects is to become fascinated by
the fiery Eva. He sees his own life reflected in hers and is not quite sure how
to handle the connection.
Can two mismatched people find enough common ground to overcome their
fears and allow love to grow?

After meeting Stud in the last book I was really looking forward to his story and seeing who could tame the player to end all players. Something about Stud was just irresistible. He may have more notches in his bedpost than anyone else ever, but his genuinely kind heart always shined through. Eva may not be who I expected for Stud, but that doesn’t mean she isn’t absolutely perfect for him.

Tough, both physically and mentally after spending her life surrounded by men and being treated like one of the guys she fights daily to not only prove her worth but also hide the more feminine side of her. I loved how as she spent more time with not just Stud but also the amazing women of the MC her confidence grew and the sides of herself she kept hidden became something she was proud of.

The romance between Stud and Eva was quite the slow burn. With many blocks in the road they take their time falling, but when they finally do it’s incredibly sweet. I wasn’t a big fan of everything that went on with the back of forth of the slow build between them. At times it even dragged a bit for me, but overall their story left me excited and looking forward to more in the series.

This MC has become dear to my heart. I love the family they’ve created and I love the atmosphere they have. All of the characters warm your heart. Eva is me. No shit, I’ve never connected more with a character as I did her. She’s tough, crass, blunt, and a freaking powerhouse. I love her. Her family is full of assholes though, except her older brother Conner. He’s a sweetheart. She has an instant connection with Stud, but being raised by guys her whole life she doesn’t really know how to fully give into that connection. Now Stud. Ugh. I’m sorry, but I don’t like him. He had a horrible upbringing and had a horrible thing happen before he found the MC, but he’s a player. If I ever thought a main MC would cheat after a book was done, it’d be him to do it. Sad, but true.

The constant back and forth between Eva and Stud was slow and left me skipping pages. I loved Mute and went into Stud with high hopes, he let me down. The writing was amazing, it was just the man who pissed me off more than anything. I loved Eva and all the ladies, and I’m looking forward to reading Blue’s book. Unfortunately Stud just didn’t do it for me.

ML Nystrom had
stories in her head since she was a child. All sorts of stories of
fantasy, romance, mystery and anything else that captured her interest.  A
voracious reader, she’s spent many hours devouring books; therefore, she
found it only fitting she should write a few herself!
ML has spent
most of my life as a performing musician and band instrument
repair technician, but that doesn’t mean she’s pigeon-holed into one
mold.  She’s been a university professor, belly dancer, craftsperson, soap
maker, singer, rock band artist, jewelry maker, lifeguard, swim coach, and
whatever else she felt like exploring.  As one of her students said to her
once, “Life’s too short to ignore the opportunities.”  She
has no intention of ever stopping… so welcome to her story world. She
hopes you enjoy it!
Author Links
TWITTER
FACEBOOK
GOODREADS